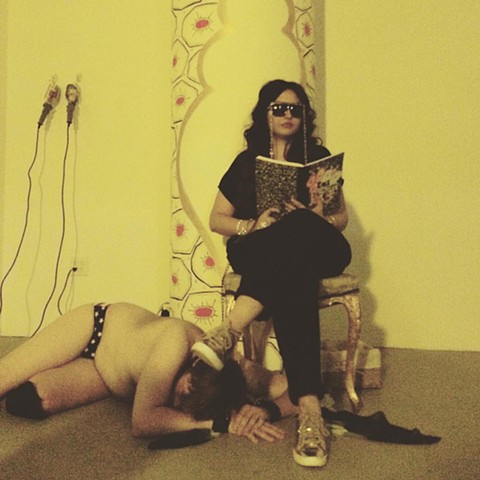 I gotta set the record straight. Some #basic dudebro started this rumor that Vishnu dreams the universe into existence while I massage his fucking feet. Only a man would think that creation involves lying on your ass. Vishnu is asleep alright, I just fucked his brains out, they don’t call this pussy Nyquil for nothin. He’s sleeping while I do all the work of giving birth to every living thing. Of feeling each life come into being. The infinite rush, the fear, the confusion, the slow dawning of consciousness. Billions of times a day. I do the work of feeling each death. The first time something died I thought my body would rip apart. I screamed for days, until that scream turned into the first song {A Devi screams behind this line, transforming the scream into notes}. But yeah, give the napping man all the credit. Typical. He has some “ideas”—which seems to be all you people care about.

You know, there used to be a time when men knew exactly where they came from. There was a time when the only thing people worshipped were the bodies of women {Devi direction: touch yourself!}. But men want recognition for the little bits of nothing they have cobbled together and call civilization. Well, here’s your credit: all it looks like from here is slavery and death. All these glittering prisons, built with the blood and suffering of my children. The blood and suffering of my body. I’m so bored with your #basic bullshit. {Lakshmi stands} I’m ready to burn this mother fucker down. I’m done being the patient mother, thinking that if you keep falling and hitting yourself in the face you’ll learn. It’s time to be proactive. It’s time to cut off some dicks and take some names.